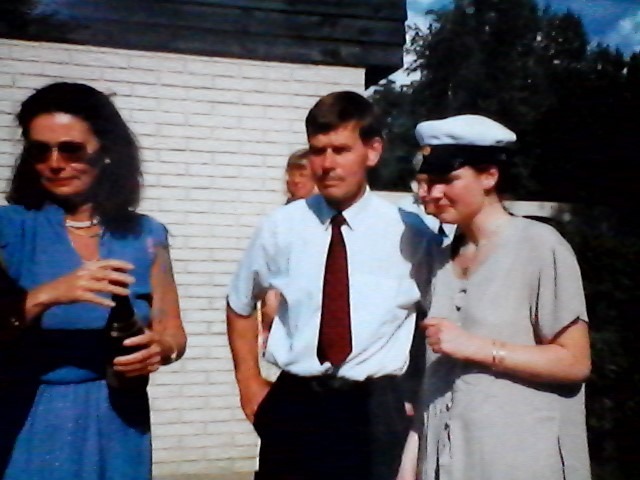 Picture off my High School graduation

Spring cleaning made me sad!

I found a lot off handwritten notes  in my closet when I was cleaning. All off them about dad and his alzheimers……

In the beginning It was easy for me to tell people. And if you would have seen me out and about in town you would never know  the sorrow I held inside me. I don’t know how many times I said My father has Alzheimer’s disease! And I get the most different comments back. – So your father is a weirdo? Does he have Cerebral Pares? Is he in a wheelchair? Then when they meet him they are ashamed.  But instead I feel bad for them. Next time I hope they think before they talk.

I never got to meet my grandmother Anna on my father’s side. I was born in january 27th 1976 and she died shortly after that. Here last address was at a mental institution. My parents demanded a autopsy because she was in here early fiftieth. It showed Alzheimer’s.

Dad always said that she was not even aware that you would be in the room. She was always staring out the window or looking on the small black and white television. Then I didn’t understand what my father was talking about. But now Its my everyday life.

As I remember it I had a great upbringing! A mom and dad that loved me, a big sister to tees and fight with and a 12 years older half brother on my father’s side to  brag about. So I was the youngest and probably the most mischievous of the kids. I could not go out from our garden without getting in trouble. Or get bruises from falling down from roofs or threes.  Dad alway sade that I reminded him off how he was in the same age. We did a lot of things together he taught me how to repair old Renault cars, to clean the bathroom drains. Him and me all the time. Hi was my Idol growing up.

1989 I was i 7th grade something happend at home.  But me and my sister could not understand it. Our parents argued all the time. –this was a big deal for me because they never did that before.  I began to spend more and more time with my boyfriend. Mum had started to realise that there was something wrong with dad, he was forgetful and started to denye stuff that he had done. She kept it a  secret for us kids, but she was begging him to go to a doctor. That doctor didn’t find anything, His heath was 100%.

So several month later she tried again. Dad refused and it wasn’t until she threatened him with divorce that he agreed. so she booked another appointment with another doctor and followed him to it.

It was now that I was told, It was Alzheimers!  And the funny thing was that I did not realise something was wrong with dad. Maybe that is why I cant remember him as he was  before Alzheimer’s hit him that’s the creepy stuff I hardly remember him being my father. To me he was more of a baby brother. With eyes like a doll, Empty eyes! He had trouble speaking and repeated himself all the time. Everytime I had friends over I was almost terrified.

And one time it happened. Mom came running down to my room. Dad was chasing here with a knife! Begin here to kill him. All my friends was in my room when she came down asking for help. Even tho my friends understood what happened the result of the incident was that I didn’t bring home friends anymore. And I was almost never home

Mum was on me all the time that I should be home more, Maybe it was my boyfriend at the time that convinced me that I needed to be at home more. Not because mom wanted it, because I would regret not being there for him, His mother had died in cancer a couple of years before and he regretted not being beside here enuf. So I started to defend dad when my sister and mother nagd on him. Help him with things and started to love him for what he becomes. I lived in the moment with him just like an animal would have done. It was my survivor taktik and it workt. For awhile….

When I was a College  freshman my dad has lost all short-term memory. And a lot of his ability to talk. It was now it was harder for me to talk about him. I never took the time to explain to my new friends what was going on. I guess I was going for being a normal student.

So today my situation has change even more. I don’t see him as my father anymore. To me he is just a cohabiter in our house how I am annoyed at. He will be moving to a home for elderly people soon. It will be nice for mom, my sister and I to be a normal family again.

I am fully aware that I have the risk of getting this horrible  deciseand I think about it alot.

Do I want to have kids?  Do I want them to go through what I went through?. Do I want to be nursed nursed by my future husband and die before him.

But still I don’t  want to know. It’s better for me to not know !

Tanks to his illness I have become a very strong individuel. It has hurt alot and my guess is its going to hurt some more years but wee as a family has survived so far so good. And in one way the hard  morning period has ended. I still would not know how I will react when he is gone. But I have a great support system around me