Did you know migraine is the leading reason for days lost at work in the world among people under 50? With women three times more likely than men to suffer with migraine, they bear the greatest impact. The Women’s Brain Project has launched a striking and thought-provoking disease awareness campaign called ‘Not All In Her Head’. This migraine awareness campaign brings to […] 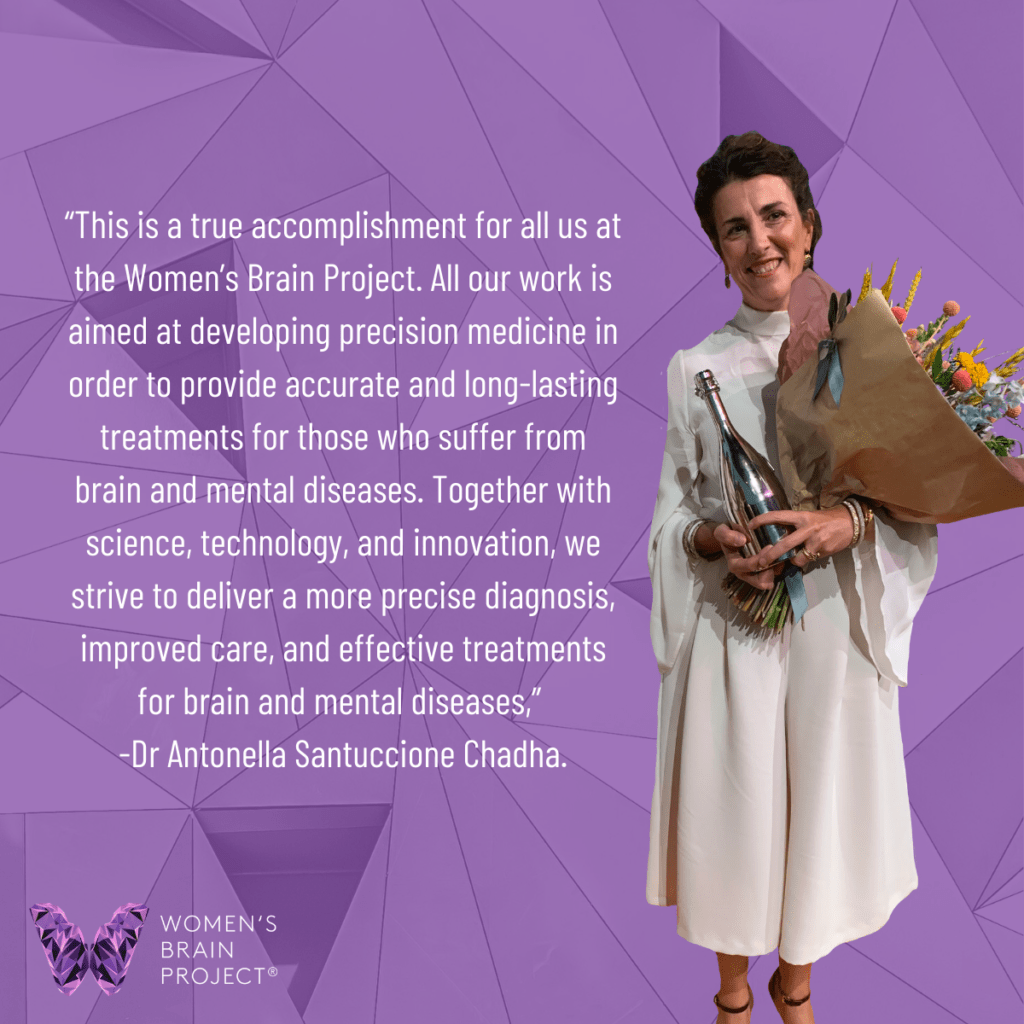 The Women’s Brain Project (WBP) is exceptionally proud that our CEO Dr Antonella Santuccione Chadha has won the Veuve Clicquot Bold Woman Award 2022 in Switzerland. The announcement was made at an awards ceremony on 1 September 2022 in Zürich. What an honour for her to be rewarded for her tireless pursuit of putting her […] 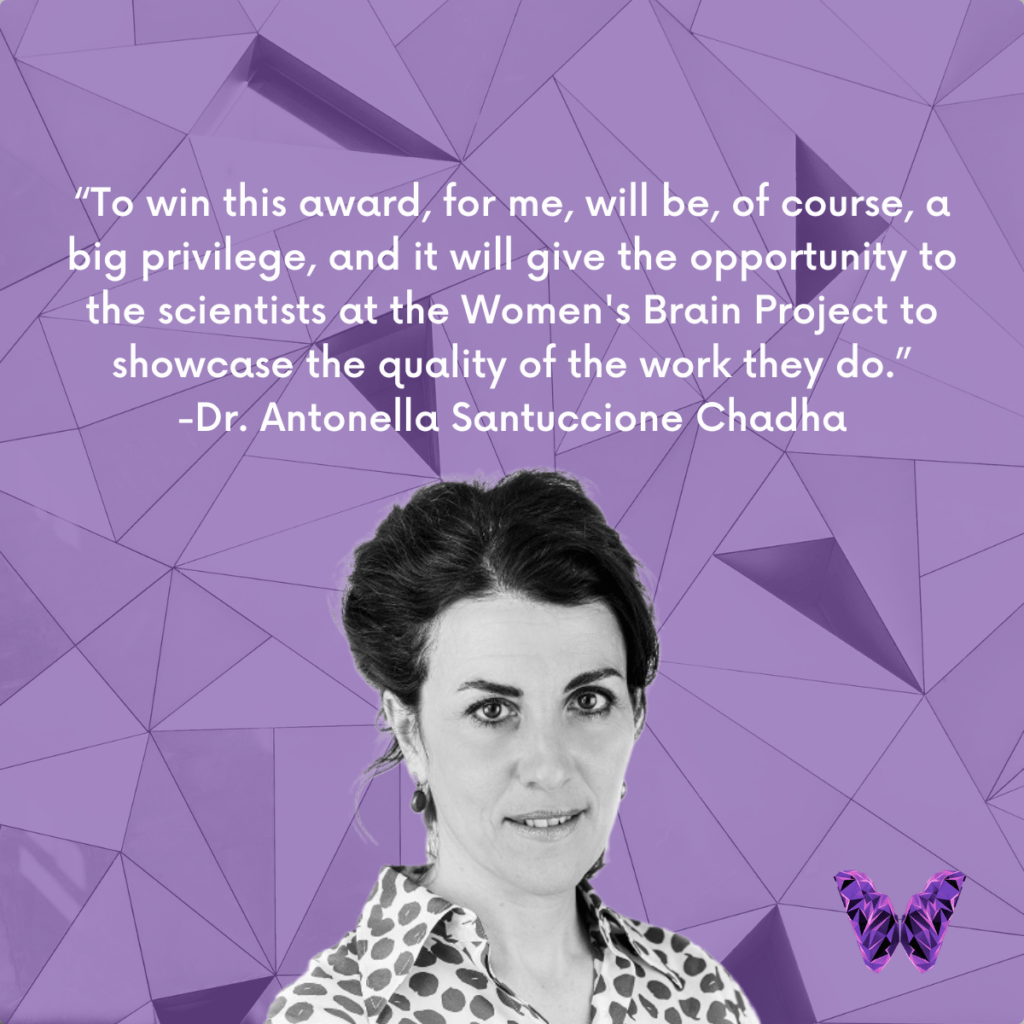 In March of this year, it was announced that Dr. Antonella Santuccione Chadha, the CEO of Women’s Brain Project, was one of the women nominated for the Veuve Clicquot Bold Woman Award Switzerland 2022 which will be announced on September 1st, 2022 in Zürich, Switzerland.   It’s an honour to be nominated for such an […] 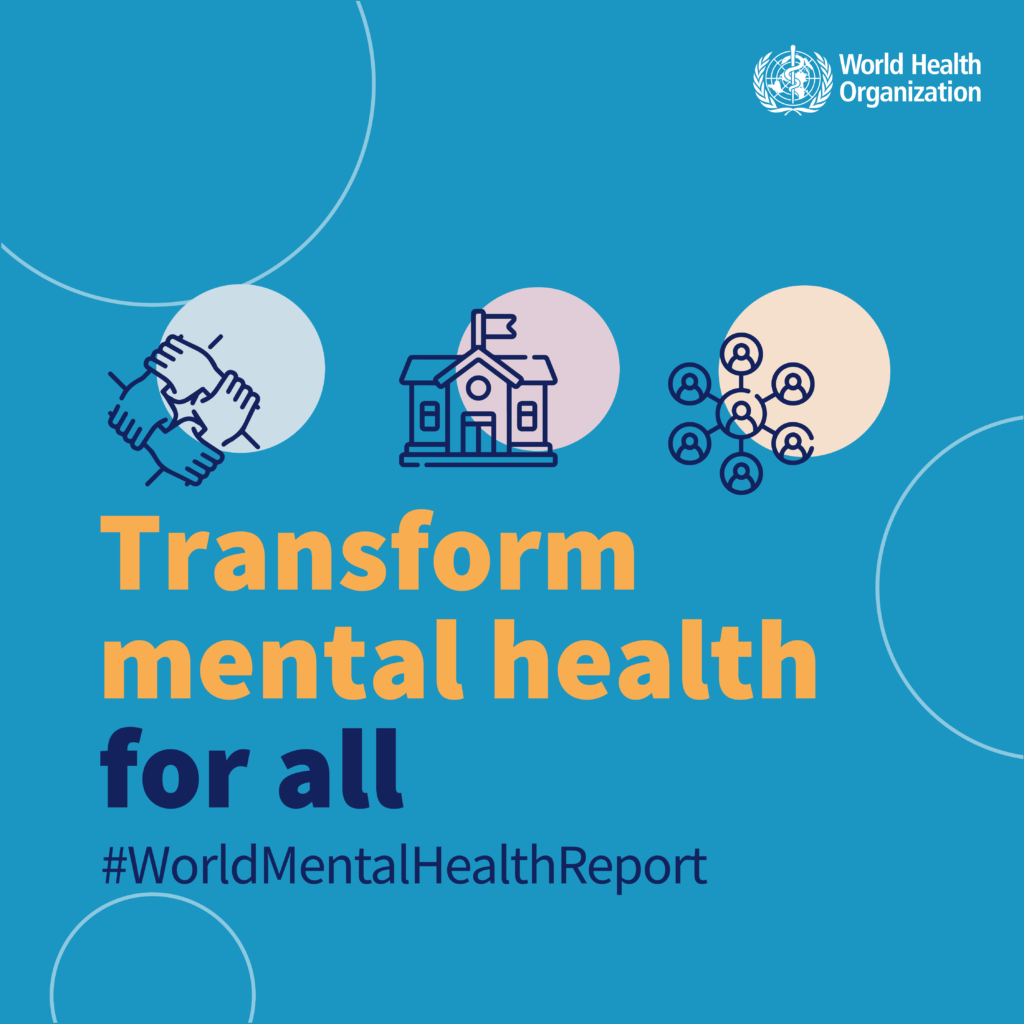 by Anna Dé – WBP Policy and Advocacy Team Lead   On 17 June 2022, the World Health Organization released its largest review of world mental health since the turn of the century. The detailed work provides a blueprint for governments, academics, health professionals, civil society and others with an ambition to support the world in transforming […] 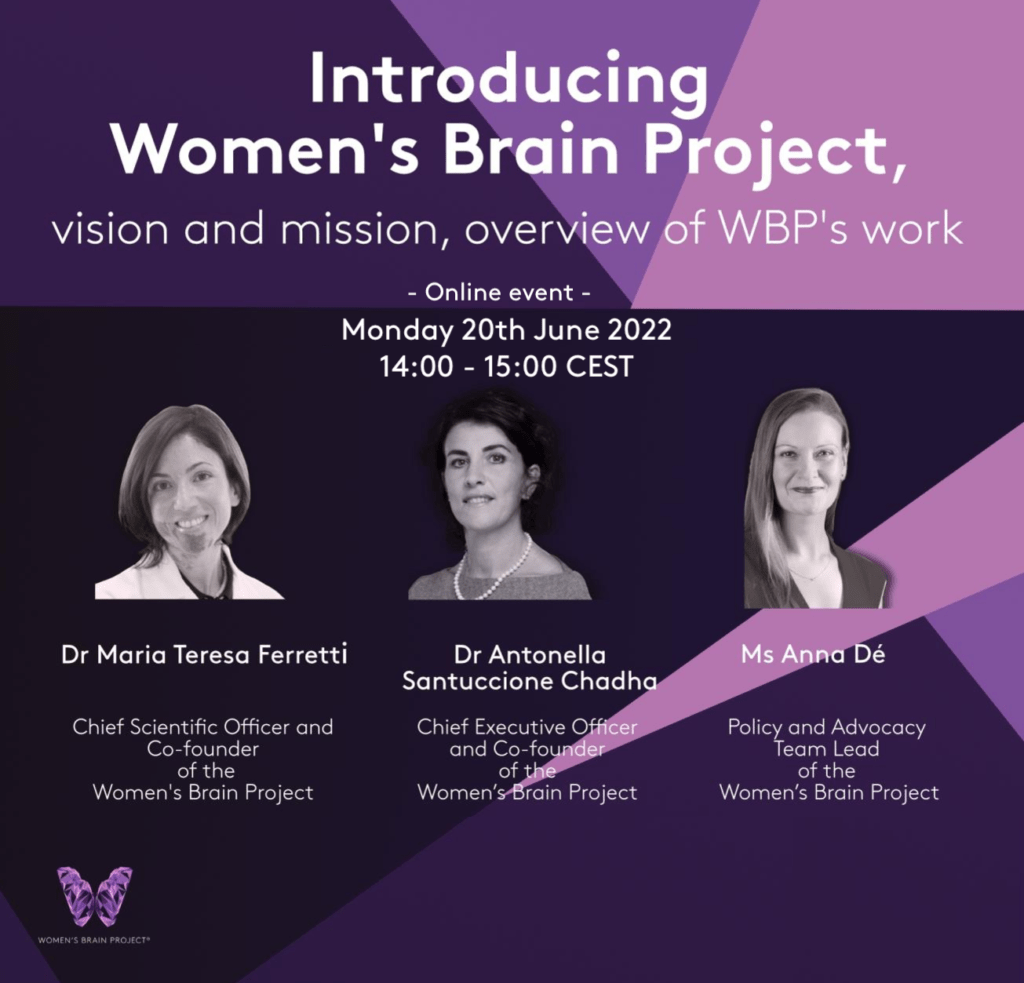 Want to know more about the Women’s Brain Project? Find out more about us at our introductory webinar on Monday 20 June 14:00-15:00 CEST. Antonella Chadha Santuccione (WBP CEO) Maria Teresa Ferretti (WBP CSO) and Anna Dé (Policy and Advocacy Team Lead of the WBP) will give the lowdown on WBP’s mission to advance sex and gender considerations for brain […] 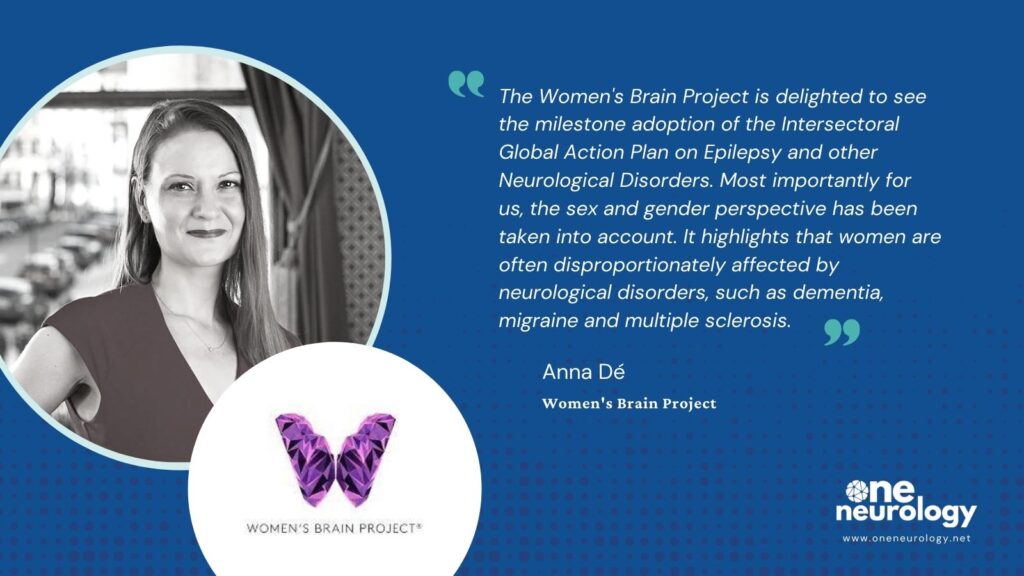 The Women’s Brain Project (WBP), along with all members of the OneNeurology partnership, celebrates a major milestone for all those affected by neurological disorders today, with the adoption of the Intersectoral Global Action Plan on Epilepsy and Other Neurological Disorders, announced at the 75th World Health Assembly. “The Women’s Brain Project is delighted to see […] 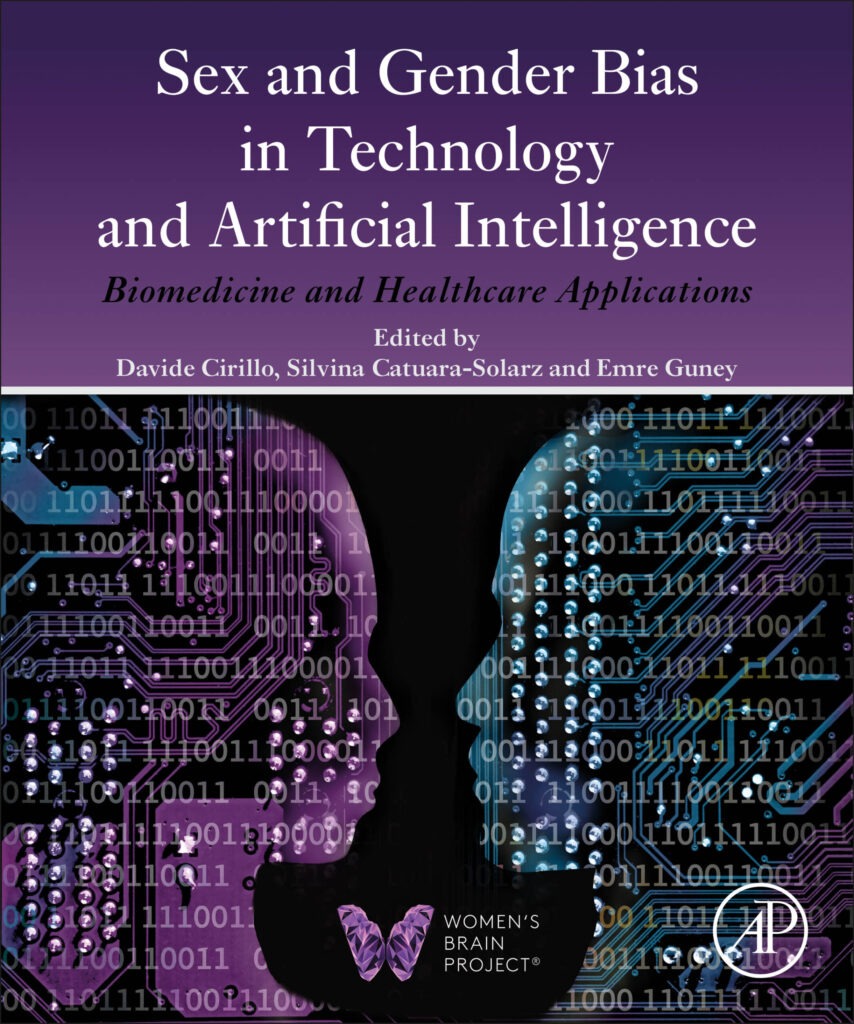 The Women’s Brain Project (WBP) accomplished yet another milestone in removing barriers posed by sex and gender biases in medicine and novel technologies: The international Swiss-based non-profit organization just published their newest book, ‘Sex and Gender Bias in Technology and Artificial Intelligence: Biomedicine and Healthcare Applications’ together with the prestigious publishing house Elsevier and in […]

by Anna Dé, WBP Policy and Advocacy Lead     On 16 May 2022, at the start of Dementia Action Week in the UK, Alzheimer’s Research UK launched a report on The Impact of Dementia on Women.  As an international non-profit organisation (based in Switzerland) studying sex and gender determinants of brain and mental health to […] 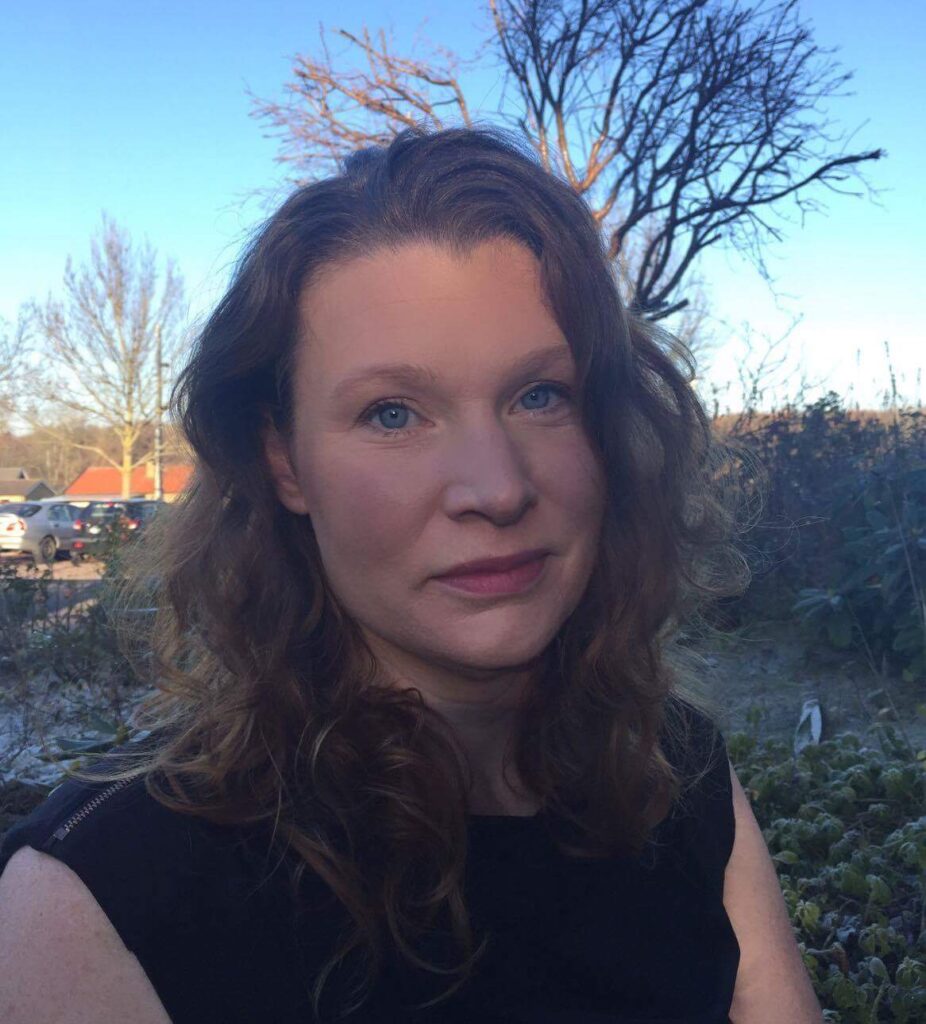 Join us in celebrating a true milestone! After years of fighting, our cause ambassador Sofia Petersson has finally received her first dose of Aducanumab, a human antibody that is capable of removing the toxic protein accumulating in the brain of those living with Alzheimer’s. Sofia is struggling since more than a decade to get to […]

The WBP is proud  that our CEO Antonella Santuccione Chadha is one of the three finalists of the Veuve Clicquot Bold Woman Awards 2022 in Switzerland. What an honour for her to be rewarded for her tireless pursuit of putting her heart, knowledge, passion and soul into the topic of sex & gender differences and […]