With the war in Ukraine, many are questioning what, if anything, could have been done to avoid it. Sheryl Sandberg said the solution was to have women in charge, but a Forbes journalist used select research to disagree. We know there are sex and gender differences in brain and mental health, but – from a scientific, evidence-based perspective – what does that mean in this case? Women are wired differently than men, including in how their brain functions. This has implications for leadership styles and even the probability to escalate situations into conflict and war.

At the Women’s Brain Project, reviewing the evidence has led us to believe that there should be more women leaders, because such gender diversity in leadership could facilitate a collective shift leading to less conflict and wars.

How women experience empathy, and the impact of culture

For starters, women experience empathy much more viscerally, as their brains don’t just register but in fact mimic the pain they see, making them feel it more than their male counterparts who process it differently. Furthermore, in situations of stress, women’s empathy increases, heightening their ability to understand another’s perspective and thereby facilitating a collaborative approach. In men, it triggers their fight-or-flight reflexes, and tends to make them turn inward to conserve energy and prepare for the confrontation they expect.

Furthermore, women are primed to produce oxytocin, also known as “the love hormone”, fuelling specific actions, whether it is towards their own children or as a triggered or learned behavior. One experiment had virgin female mice co-housed with experienced mothers and their litter, where the mothers enlisted the help of the virgin mice to assist with pup retrieval. This promoted “alloparenting”, care by individuals other than the parents, triggering the production of endogenous oxytocin in the virgin mice. In other words, by carrying out maternal actions, they experienced hormones that would otherwise only be in their system if they had given birth. This points to women’s capacity to collaborate in a way powered by “shared empathy”.

Combined, this research suggests that female leaders may have a natural tendency to foster an empathy-driven perspective and collaborative approaches to problem-solving.

These innate tendencies are not absolute, however, because “the brain is not independent of the world it lives in”. The objectification of women, for instance, leads to a lack of empathy with the individual in question, by both men and women. It can therefore be said that sex differences in empathy are not merely cultural by-products of socialization, but have a biological basis that is reinforced by culture.

An important caveat about biology, culture, and gender

Science is not perfect. First, imaging studies carried out cannot tell whether sex or gender differences are due to biology or culture, as the brain does not develop in a vacuum. It is therefore often impossible to identify causality rather than mere correlation.

Furthermore, a majority of scientific evidence is based on population samples that are western, educated, industrialized, rich, and democratic (which some scientists refer to with the acronym “WEIRD”). This is a very reductive approach, which glosses over the richness and diversity that exists worldwide.

In nature – and this extends to human societies – diversity is fundamental at every level, as it brings different perspectives, skills, and competence to the table. There’s a reason why diverse teams perform better business-wise, as do gender-diverse teams.

What does this mean for leadership & war?

While female leaders may tend to be more collaborative and empathetic, in contrast to male leaders who may typically tend to be more physically aggressive and often overconfident in their leadership style (note, this references the male sex rather than the broader spectrum of gender identities for which research is not as readily available yet), it isn’t black and white.

Male caregivers, for example, tend to use task-oriented – and more effective – coping strategies, while women tend to use emotion-focused strategies which often increase the risk of burnout. So, it’s important to remember that the full spectrum of research shows us that women and men have different leadership traits, and that there are advantages and disadvantages across the board.

As mentioned in the Forbes article, having a single woman in a leadership position among male peers likely reflects a selection process favouring masculine traits, and social pressure can lead to greater aggressiveness in an attempt to combat gender stereotypes so as not to be perceived as weak.

Having isolated women in positions of leadership is unlikely to enable societal change on a wide scale. A collective of women in leadership positions across geographies, however, could balance out perceived social pressure and facilitate a more collective, collaborative, empathy-driven approach to leadership.

This is one of the reasons why the UN Sustainable Development Goals highlight gender equality as a fundamental prerequisite for a peaceful and sustainable world. Leaders do not exist in a vacuum, and neither do social difficulties, inequities, and systems.

In fact, equity issues – whether related to gender or other characteristics – are often addressed following a crisis in the system. With that in mind, could this crisis be one of the systemic nudges we, as a society, need to act as a catalyst for institutional change leading to more women in leadership positions?

At the Women’s Brain Project (WBP), we strongly believe that patriarchy is no longer an option. It is time for equality, diversity in leadership whereby women leaders – enabled by their female peers – can work with counterparts of other sexes and genders for optimal solutions that balance out any extreme and more violent tendencies, and an era of empathy. 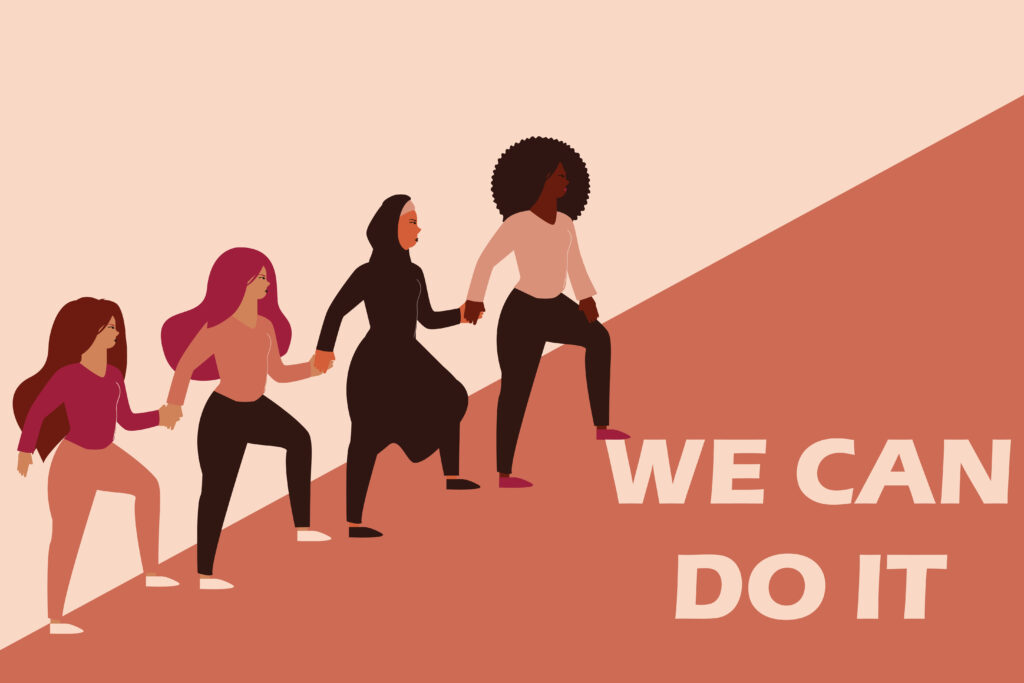