In March of this year, it was announced that Dr. Antonella Santuccione Chadha, the CEO of Women’s Brain Project, was one of the women nominated for the Veuve Clicquot Bold Woman Award Switzerland 2022 which will be announced on September 1st, 2022 in Zürich, Switzerland. 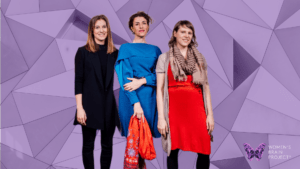 It’s an honour to be nominated for such an award and in the video below you can learn from Dr. Antontella Santuccione Chadha exactly how she feels about being nominated.

We are looking forward to the announcement on September 1st, and will be celebrating whoever shall be declared the winner. Strong women leaders changing the world around them as the women who are nominated are doing every day, is such an inspiration for each and every one of us. As we at the Women’s Brain Project continue working to study and close the sex and gender gap existing in brain and mental diseases, we will look to these women as our motivation that change in the world is possible.

Our mission could not be achieved without our team, our many supporters, and all those who donate. If you would like to get involved and become a member, or donate to the work that is done here at the Women’s Brain Project, we’d be grateful for your involvement and support as we continue to change the world together.